Don’t Be Fooled: How You Can Detect Business Fraud 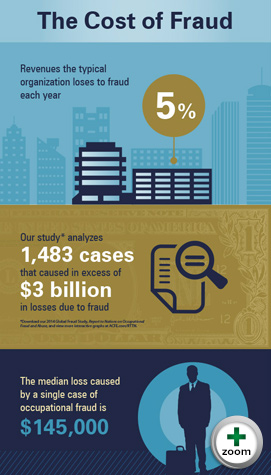 I’ve spent decades investigating business fraud as a forensic accountant and expert witness, often at the state and federal levels. The lessons I’ve learned about human behavior and motivation during this time have benefitted my clients in surprising ways. According to the Association of Certified Fraud Examiners, the typical organization loses 5 percent of revenue each year to fraud. The median loss caused by fraud is $145,000, with the fraud lasting a span of 18 months before detection. Every business owner is vulnerable.

As business owners, we call upon other professionals to help us with business matters through specific “lenses.” An attorney assists on legal matters while a CPA focuses on taxes, for instance. But, as a forensic accountant, I’ve learned to draw upon a combination of these lenses to determine how a business person likely reacted—or is bound to react—to certain situations.  As D. Larry Crumbly, Lester E. Heitger and G. Stevenson Smith outline in the book Forensic and Investigative Accounting,a forensic accountant’s knowledge base should include accounting, law, criminology and investigative auditing. Looking at the situation from different lenses is critical to exposing fraud.

While I agree with the authors, I’ve added one more important lens to my arsenal over the years: an understanding of human behavior. An understanding of motivation, specifically, can be a reliable predictor of behavior. Perhaps the strongest example of this—within my own experience—was discovered during the U.S. Senate’s Whitewater investigation 20 years ago.

By the time I was named the sole investigative accountant on the case, the Whitewater matter was well scrutinized. It was perhaps the most scrutinized case of potential tax fraud in U.S. history, serving as the subject of hundreds of articles, news investigations, a Resolution Trust Corporation investigation and U.S. House investigation, as well as an investigation by Special Prosecutor Kenneth Starr. Yet, amidst this intense scrutiny, I was the first to discover a previous land deal with Jim McDougal prior to the Whitewater deal. What led me to this discovery? When it comes down to it—based on human nature—people tend to act and react similarly when investing money. Therefore, I had a hunch that Whitewater wasn’t the Clintons’ first land deal.

What I knew about human behavior dictated the following: Individuals are not likely to invest that much money (approximately then-Governor Bill Clinton’s annual salary at the time) on a first time investment with a referred promoter. I believed that most people would try a smaller investment with a promoter first. If that proved successful, then they would make the larger investment. It comes down to the idea of loss aversion, or the tendency for risk-taking to be motivated more by an aversion to loss than a penchant for gain. Experience tends to lessen the aversion.How can these types of behavioral insights translate to your own business dealings? First, don’t ignore instinct. If you suspect deposits are short this month, there’s too much radio silence by an executor in a family-owned entity, or any other fraud red flags: investigate it. Even if the evidence under one “lens” seems to be in order, following a trail through another lens may show an entirely different picture. A forensic accountant can help you do that. We’re often brought in to help with high-risk audits, family business and partnership conflicts, and potentially messy situations like a divorce among business owners. However, working with a forensic accountant proactively to recommend systems of internal controls can deter or assist in reducing the impact of potential fraud on your business.